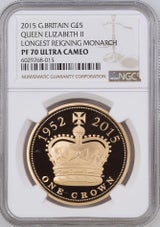 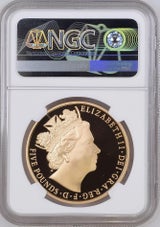 The obverse features a special commemorative design by James Butler, showing a mature Queen wearing the King George IV State Diadem, which she first wore on her coronation day, on her way into Westminster Abbey. She later changed into the St. Edward's Crown at the altar.

The reverse of the coin shows an engraving of the Coronation Crown (St. Edward's Crown) by James Butler. The reverse bears the inscription 1952 - 2015 ONE CROWN.