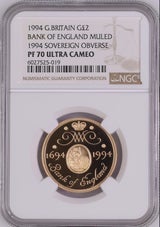 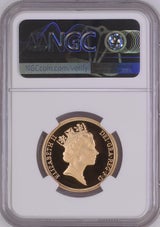 Designed by Leslie Durbin, corded oval panel at centre of Britannia seated right with shield, holding spear and olive spray, with beehive of industry, hatched exergue, crowned WM monogram above for William and Mary, date 1694 to left, date 1994 to right, italic Bank of England below.

The Muled coins obverse resembles a Double Sovereign, perhaps from a previous year, and you will see it has no denomination (Two pounds), a larger portrait and the different writing around the outside. Otherwise the same £2 gold proof coin.

“Only 1,000 of these gold strikings were issued by the Royal Mint in 1994 to celebrate the Bank of England's 300th anniversary having been founded in the reign of William and Mary (1688-94). It was only when customers received their freshly minted coins in 1994 that the mistake upon the coin was noticed in that the wrong obverse die had been used in error. Rather than the regular "Two Pounds" obverse with those denominational words under the bust being used, a number of examples had no denomination mentioned at all, the obverse being that used on the St George and dragon reverse Double Sovereigns. The Royal Mint having been made aware of the error pieces wrote to all customers who had ordered the coins asking them to return their error pieces for a free replacement with the correct obverse.

It is not known how many of the 1,000 struck carried the error obverse, or how many customers took up the free offer to opt for a replacement. Perhaps as many as half the issue were of the wrong obverse, but probably less and some were no doubt replaced with the error piece being melted down.

Prior to this addition, there were three NGC top graded examples, two sold by Sovereign Rarities (who we thank for the details above) and the remaining example which sold well through auction site Heritage in 2019. Clearly the coin remains highly sought after and rare according to Heritage’s description of the coin for that auction...

“A technically perfect and very rare Mule, bearing the traditional Double Sovereign obverse as opposed to the correct Two Pounds obverse. An unknown number of these pieces were issued by the Royal Mint, after which the Mint sent out letters asking for their recall. Due to the quality control measures implemented for gold coinage, such errors are very seldom made and are accordingly very rare.“

In addition to the now 6 NGC 70 graded mules, there are two further examples graded 70 by PCGS, although it would have been easier to confirm this if they had kept the 1994 mule and corrected £2 separately and correctly listed. Both of these two PCGS graded examples sold at auctions this year, the highest of which sold for £7,000.